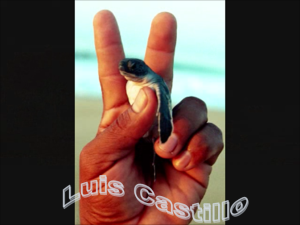 Just a short walk up the hill (12 mins) at the end of the main road that curves through San Agustinillo and you will find yourself in the neighbouring village of Mazunte. The impressive Turtle Museum is right on the main road- the Centro Mexicano de la Tortuga. The Mazunte Mexican Turtle Center offers aquarium viewing of sea and land turtles in a museum building and rehabilitation areas outside where injured turtles are cared for.  A few years ago we found a baby turtle on the beach in San Agustinillo.  Fishing lines had become wrapped around her left flipper and had lacerated the turtle as it struggled to get free.  We wrapped it in a towel and took it to the Turtle Museum where they nursed her back to health and eventually she was released.  They were kind enough to let us visit our “adopted” turtle any time we wished in the several months it took to heal her injuries.

The museum was opened in September 1991 to help the local economy since the turtle and turtle egg trade which the area had previously relied on was made illegal. It holds every species of marine turtle inhabiting the Mexican coast, as well as 6 species of river turtle and 2 types of native land turtles. The installation includes large outdoor tanks, an aquarium and incubation facilities. It is open to the public Tuesdays through Saturdays, 10 a.m. – 4:30 p.m., and Sundays from 10 to 2:30 p.m.

Make 2019 the Year you visit San AgustinilloJanuary 1, 2019
Make sure you visit before the rest of the world finds us! The Mexican Government last year, gave its seal of approval on this magical stretch of Paradise in the state of Oaxaca and word is spreading quickly!
Follow San Agustinillo-Beaches-Casa Mihale-Safe Warm & Friendly on WordPress.com

Book Your Vacation This Year!

Visit us on Trip Advisor

See what our guests say!